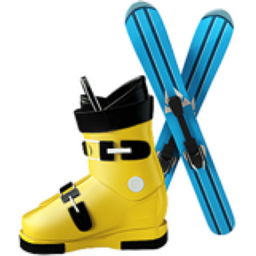 The sport of skiing. Skiing is a winter sport where a person attaches a ski to each foot and slides on snow. A very popular sport to watch during the winter Olympics. There are general categories of recreational skiing, downhill skiing and cross-country skiing. Downhill skiing requires starting at the top of hill or mountain. Cross-country skiing does not require a hill and can be done on a flat surface. Can also be used to communicate water skiing, a sport where a person skis on top of water while being pulled behind a motor boat (ski boat).

Light blue Snow skis and poles as if someone is wearing and holding them but there is no one there. No slopes either.