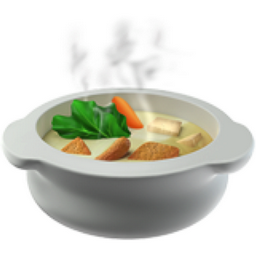 Many different types of foods can be in this pot of food. Also called nabemono. The Japanese have many stew- and soup-like dishes that would fit into this category. A Japanese version of a fondue pot, but instead of cheese, the pot in the middle of the table is full of a stew or soup from which everyone serves into smaller individual bowls. A pot of food makes for a communal and family eating environment.

Most likely rice! Am I right? A meal in a bowl probably rice and other vegetables. Either way you get to eat tonight emoji. Yes! iEmoji old Name: Steaming Bowl