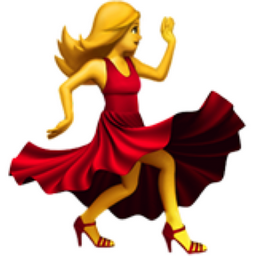 A person dancing to music. Dancing is the action of moving your body to the timing of the music. Some versions of this emoji depict a woman in a red dress vigorously dancing. Other versions display a man dancing with arm out and feet in motion. A very popular emoji used to communicate excitement, celebration, and/or party. The Apple version is the most glamorous, with a woman wearing a fancy flowing red dress potentially doing the cha cha or tango.

Night out on the town!