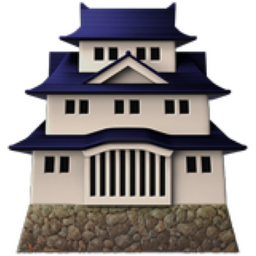 A classic Japanese castle. A military or fortified structure used to protect land and people. Commonly placed in strategic locations to protect and guard Japan from enemy forces. The home of the Emperor, royal family, or important, rich and powerful people of the past.

A Monk's shrine at the top of a hill on a clear blue sky day. What are you waiting for Rocky! Run up those millions of stairs, get em tiger!