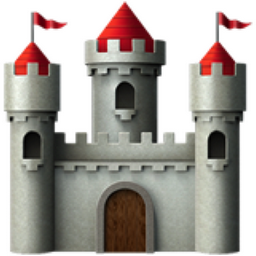 A classic European castle, potentially the German Neuschwanstein (New Swanstone) Castle that Disneyland's castle was modeled after. A castle is a home or residence of a family with lots of money and power, such as a royal family. A fortified or military structure used to protect land and people. The largest form of home, significantly larger than a mansion. Most buildings large enough to be considered a "castle" are no longer owned by individual people or families given their extreme size and cost to maintain. Most castles are now owned or operated by governments, corporations, or large organizations. The symbol for the Walt Disney Company.

Here are some onion domes on a Russian cathedral or castle.