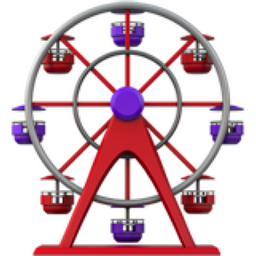 Ferris wheels are found where people seek entertainment, such as at an amusement park, traveling festival, carnivals, or theme park. A large circular (wheel) ride that rotates while people sit in baskets or pods that are attached tot the outer portion (circumference) of the circle. The London Eye is one of the largest Ferris wheels in the world and is a very popular tourist attraction in London.

Amusement Park. An original Ferris Wheel. A symbol of unadulterated fun for carnies and connoisseurs alike.