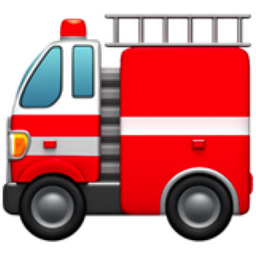 A fire engine is used by fire fighters to pump water to put out fires. A fire truck is used to carry long ladders to help fire fighters gain strategic access to burning buildings.

Cute little fire truck with a ladder on top. Used by firemen these come in all sorts of shapes and sizes but will tend to be Red.