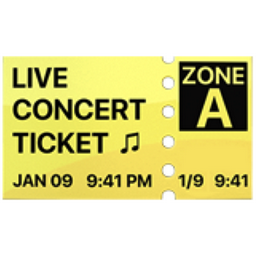 A ticket to an event, such as a rock concert, movie, or sporting event. Tickets are used to identify people that purchased or obtained proper admission to an event or place. The Apple version emoji is for the "John Appleseed World Tour" in Zone A on April 1st at 6:30. April 1st is also known as "April Fool's Day," a day where people play tricks on other people to fool them into believing something that isn't true. The Apple version also includes two Japanese ideographs, one that means "month" and the other "day."

Indicates Event. Not to be confused with the color of money in some places. iEmoji old name: Foreign Currency