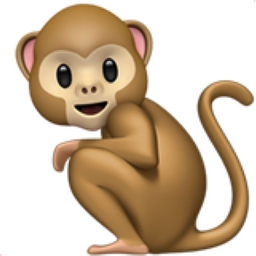 • ninth of the signs of the Asian zodiac

A monkey is furry mammal that is known for swinging from trees. A animal part of the primate family. Stereotypically thought of as loving bananas, but not all monkeys around the world are native to areas where bananas grow. Monkeys do love fruit and therefore typically would enjoy a banana. An emoji used as a term of endearment, particular towards children when they are acting silly and climbing all over everything. "You silly ol' monkey!"

The animal all too well known for throwing feces. Cute!