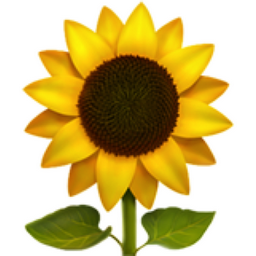 Sunflowers are named after the sun because they remind people of the sun. They are massive flowers that are yellow with pedals that look like sun rays. Sunflower seeds are very tasty and are a popular active eating treat. Baseball players love sunflower seeds because they can large quantities in their mouth to puff out their cheeks. The shells are removed from the edible seed in the mouth and spit out.

A yellow sunflower with stem and two leaves. You can find these in the Great Plains a Blaze.