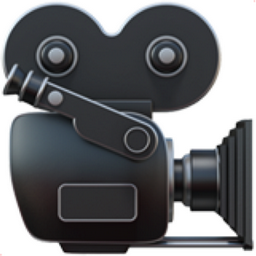 A film-based video camera used to make movies on photographic film. A movie camera holds unexposed (not exposed to the light) film in one circular reel and exposed film in the other circular reel. The unexposed film is pushed through the body of the camera until it passes the lens and shutter where it is exposed to light. A movie camera simply takes many pictures over a short period of time. The pictures are then developed and shown one after another at the same speed that they were run through the movie camera. The result is interpreted by the brain as motion. Used to communicate motion picture, film, or movies. A professional movie camera. Making a movie. Lights, camera, action!