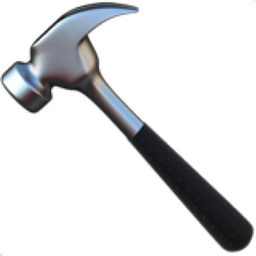 A hammer is a tool used to hit a nail. An emoji often associated with a handyman, or person that is good at building things. Working or doing work. The most popular tool ever made. To lay down the law. To be strict, firm, or unrelenting. Also used to communicate being extremely intoxicated or drunk.