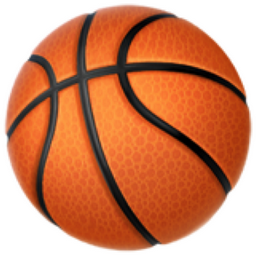 The sport of basketball. Basketball is played on a rectangle court with two teams of five players. Each team's objective is to put the basketball through the teams basketball hoop on their side of the court. Professional basketball players in the United States of America compete in the National Basketball Association or NBA.

A light brown basketball laying on the ground. Lets play or watch some BBall! The hoop is obscured by the ball, but we have faith it's there Apple! TY!