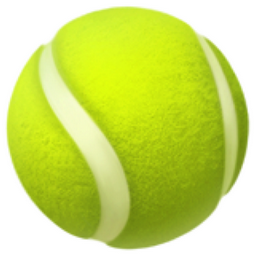 The sport of tennis. Tennis is played with a racket and a ball (typically a bright fuzzy yellow ball that bounces). The game is played on a rectangle court with a net down the middle that splits the rectangle in half. When two players play against two other players it is called doubles. When a single player plays against another single person it is called singles. The objective is to hit the ball over the net with the racket and land it within the boundary of the other player(s) court (the lines are considered to be in bounds). A point is scored when the other player(s) cannot hit the ball back over the net before to the ball bounces two times. The point system is a bit unique in that zero points is called "Love", one point is called "15", two points is called "30", three points is called "40", and the winning point is called "Game."