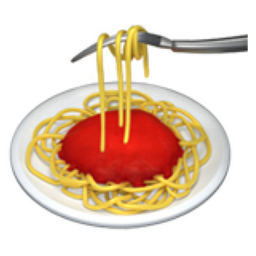 A plate of spaghetti noodles and tomato sauce. An dish of Italian origin. A spaghetti noodle is a long, thing and round pasta that is often purchased dried. The dry noodles are boiled in water for approximately 8 to 10 minutes. Traditional spaghetti sauce is tomato based and includes flavors of basil and garlic.