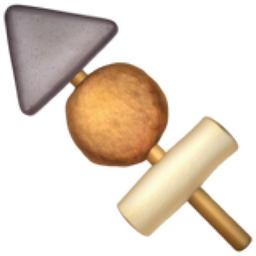 Oden is a Japanese dish sold widely across Japan, particularly in the winter as it is a warm and hardy dish. Sold in a stew form or on a skewer (pointy wood stick). Can include many different ingredients, such as hard boiled eggs, tofu, and seafood.

Looks like seafood on a skewer to me! Yakitori, Japanese Shish Kabob, Translation: Fish tofu and veggies on a bamboo stick. iEmoji old name: Seafood Casserole