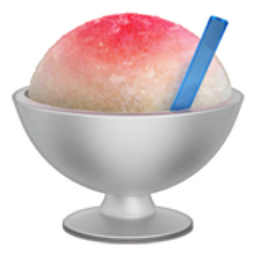 Shaved ice is frozen water that is cut into small easily melted pieces. It is traditionally served in a paper cone and covered in a flavored syrup or many flavored syrups. A childhood favorite is to order a "rainbow cone", which means a cone full of shaved ice and colored with many different flavored syrups until the ice is colored similar to that of a rainbow. A rainbow cone may include cherry (red), lemon-lime (green), raspberry (blue), and grape (purple) flavored syrup. Shaved ice may be served with a straw, which allows people to skip the watery ice and jump straight to the sweet syrup flavor that inevitably consolidates with a high concentration at the bottom of the cone. The Apple version emoji is flavored with a single red in color syrup, most likely cherry given its extreme popularity.