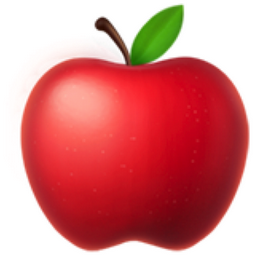 Red apple with a leaf on top still attached. An apple a day keeps the doctor away, or so they say. Apples are a fruit that grows on an apple tree. The "red delicious" apple is the most iconic representation of an apple, especially in the Pacific Northwest potion of the United States. However, there are thousands of apple varieties.

Red apple with a leaf on top still attached. Make something out of it! iEmoji old name: Apple with Greenery