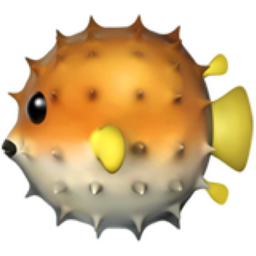 A blowfish (also called a puffer fish) is a fish that can puff up (expand) into a spikey ball when scared. The act of puffing up makes the fish bigger and less appealing to eat by possible predators. Blowfish are also known for being poisonous as they contain highly toxic tetrodotoxin. Despite this toxin, some daring people consider blowfish to be a delicacy and will eat the portions of the fish that contain less or no toxin. This emoji swims under the radar by appearing harmless, easygoing, and slow speed, but when threatened, can grow in size, accentuate its spikes and ultimately be extremely deadly. Homer Simpson once ate one of these.

Careful, the traits of a puffer fish can be found in people too. Sometimes the quiet ones are most dangerous.