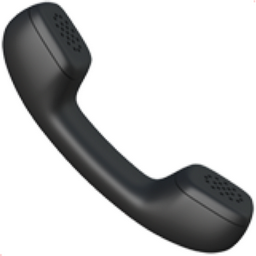 The receiver of a telephone. Prior to mobile phones, pay phones and home phones included a large hand-held receiver. The receiver included a speaker on one end and a microphone on the other. The portion with the speaker would be held to the ear while the microphone side would be held close to the mouth. While the classic telephone receiver is rare, its shape will be recognized for years beyond its useful life, primarily because it is used as a label or icon in smart phones and other graphical displays.