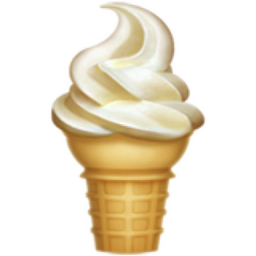 Soft serve ice cream is cream that is frozen and mixed with air in a specially designed soft serve ice cream machine. The introduction of air makes the ice cream softer than normal ice cream, hence its name "soft serve." It is traditionally served in a waffle cone but can also be ordered in a waffle bowl or regular non-edible bowl. As people have become more health aware, many establishments now offer soft serve frozen yogurt ice cream, including many that sell frozen yogurt exclusively with few if any other products.

Frozen yogurt ice cream that came out of a softie machine on normal cone.